On 400 m² we planned and realized a modern recording studio complex with two control rooms and three recording rooms for the Klangfabrik.

Our client’s requirements were clear and precise. They presented us with many exciting acoustic challenges to create a recording studio complex with several recording and control rooms.

The design as well as a timely and budget-friendly implementation of a new, flexible studio complex with various recording rooms that are optimally tailored to acoustic music and large ensembles was desired. In addition to first-class acoustics, a modern and timeless look of the rooms should play a major role. Compliance with international standards was also a condition.

With the three recording rooms, it was particularly important to the customer to have three different reverberation times. That way the respective recordings can be dealt with differently. In the control rooms, on the other hand, absolutely linear reference acoustics were an absolute must for the customer. Because not only our customer himself but also every technician worldwide should be able to judge the productions absolutely neutrally.

The cooperation with mbakustik was exemplary and Markus was personally available to advise us at all times.

We deal with the planning and realization of recording studios on a daily basis. But this project with its specific acoustic requirements for a “recording studio complex with several recording and control rooms” was something special. Because nowadays it doesn’t happen often that large studios with several control rooms and large recording rooms are newly built, and the initiator and founder is almost never younger than thirty years old. We were all the more impressed by Oliver Wiesmann’s consistency and passion in creating a large and uncompromisingly professional recording studio.

In total, two control rooms and three recording rooms have been created on around 400 m² and we are a little proud to have planned and built this modern recording studio complex.

STUDIO 1 – Ideal for recording vocals and other smaller setups

The STUDIO 1 is a medium sized recording room of about 17 m² and is ideal for recording vocals and other smaller setups. TrapCore bass absorbers, A115 broadband absorbers and wooden diffusers are installed behind the fabric covering on the walls. On the ceiling, type A115 absorbers and RPG Skyline diffusers ensure a lively, yet controlled sound pattern without early reflections.

Right next to it is STUDIO 2, the large analogue control room with the refurbished 4000 SSL, which was originally located in Bryan Adams’ studio in Canada. All walls are realized with the Acoustic Design System ADS, the main monitors (ATC SCM110 + custom subs) as well as the large display are embedded in the front wall. A large producer desk not only serves as a work surface for the studio guests on the rear platform, but also houses the racks for the extensive outboard gear. Type D517 diffusers are embedded in the ADS on the rear wall, A115 absorbers and RPG Skyline diffusers were installed on the ceiling.

The most expensive loudspeakers are of no use to you if they are in a bad room and you cannot properly assess their performance. Invest first in your space and then further in your technology.

Oliver Wiesmann about the importance of room acoustics I Klangfabrik Studios

The STUDIO 3 digital control room was also implemented with the ADS system, with Neumann KH420s being used as the main monitors. A115 absorbers and RPG Skyline diffusers are installed on the ceiling; in both control rooms, the lighting is provided by LED profiles embedded flush in the walls.

STUDIO 4 is a drum booth that offers visual contact with the large recording room via a large glass front. Although the room is only about 11 m² in size, it offers ideal recording conditions for drum sets thanks to the ceiling height of 4.50 m and the complex geometry. The walls are also fully constructed with the ADS system, A115 absorbers and RPG Skyline diffusers complete the room acoustics concept.

The large STUDIO 5 recording room offers space for up to 40 musicians, so that large ensembles can also be recorded. Thanks to the non-parallel walls and the folded ceiling with a height of up to 4.60, the room is not only big, but also sounds like it. Behind the continuous fabric covering of the ADS on the walls are TrapCore bass absorbers, A115 broadband absorbers and diffusers, which are supplemented by A115 absorbers and RPG Skyline diffusers on the ceiling. Of course, all studio rooms are air-conditioned and have natural light.

Oliver Wiesmann’s path as a musician began at the age of 5. When he wasn’t booked as a commissioned musician for various bands, he spent his time in established studios to be trained as a technician. Already at the age of 18 he founded the Klangfabrik studios.

At the same time, he completed his studies at the Folkwang University of the Arts with a focus on jazz and popular music with drums and piano.

He has already mixed and produced a wide variety of studio and live productions with chart positions. Thanks to constant progress and growth, Klangfabrik is now a young team with many years of experience. 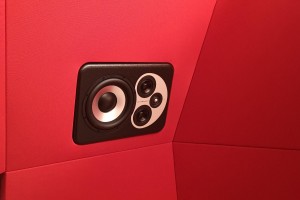 A flexible and integrated construction solution for recording studios 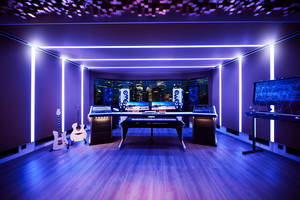 SDM UNCOMPROMISING STUDIO ACOUSTICS IN THE HEART OF EUROPE

Including a breathtaking view of the Frankfurt skyline in the new CUPRA Music Labs of the world-renowned music manager Stefan Dabruck. 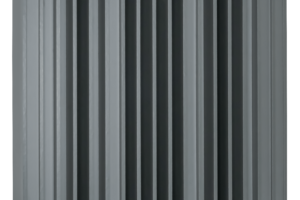 This one-dimensional diffuser is designed for a frequency range between about 500 Hz and 4 kHz...