We have planned Europe’s biggest mastering studio in the Spanish capital as an independent structure made of concrete with acoustical aspects only.

We were a bit surprised when Nick Litwin contacted us for the first time and asked us to build the best possible mastering studio regardless of the cost. Our surprise grew even more as it turned out during the project that he was completely serious about this. We accompanied the project from groundbreaking since the room was built in the yard of a one family house in Madrid suburb Vaciamadrid as a completely detached structure. With an overall room volume of 220 m³ emerged Europe’s biggest Mastering studio.

All acoustic modules used were built here in Osnabrück and assembled on site by a great construction team under our leadership. 60 broadband absorbers of the type A100 wall mounted and fabric covered are complemented by 30 bass traps type Masterlab to prevent long ringing in the lower frequency range, thus ensuring precision and pressure in the deep bass range. The geometry of the “concrete case” primary structure which has no parallel surfaces already didn’t have dominant room resonances.

With the give perfectly symmetrical structure, the stereo image is phenomenal. The sonic depth is sensational and even the smallest differences in the positioning of sound sources are perceptible. Two large custom made QRD diffusers at the front and the rear end of the room provide a diffuse reverberation in the room. The overall result is a very linear and tonally balanced frequency response.

We would like to give you two reactions from the specialized press to the new Mastering Mansion in Madrid, which we were very pleased of. On one hand, the Spanish specialist press has rewarded the price for most important audio installation of the year 2011 to the studio. On the other hand a detailed report was printed in the November issue of Studio-Magazin.

We ask for forgiveness for putting this article online here although it might be a little vain.

We have created an animated video illustrating the complete process of studio design. The development of Mastering Mansion Madrid from the first sketch to the finished room brought down to just two minutes. Unfortunately we’re not that fast in real life. Thanks to Mike for animation, editing and sound, great job!

The Mastering Mansion Studio was presented with all its special features in an elaborate video production by Adrian Tucker.

Adrian Tucker is a well-known musician and producer with a background from the Rockschool of London and runs one of the most popular music production YouTube channels in Spain. His channel is accompanied and consulted by outstanding professionals in the industry. 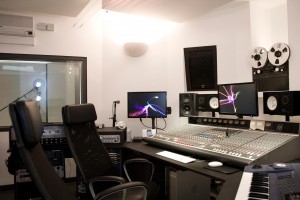 New studio in the city of Munich - The new studio 6.0 in Munich specializes inter alia on fat rock and metal production and is providing [...] 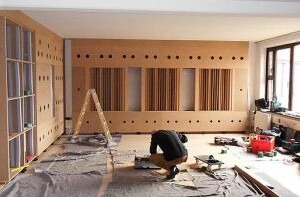 Individual Diffusers built to dimension in our workshop